Motivation is an untamed horse. There’s no knowing entirely where it comes from or what it’s going to do next. The drivers behind this little project where many, but certainly not aligned with any modelling big picture of mine. After all, there are no roads at Rewanui, so a car is somewhat surplus to my needs. Anyway, I present the first shots of my first 1939 Austin Seven (ARR) Ruby. There are quite a few things to tidy, and assembly and detailing has been a bit of a learning curve. Giving the paint more time to harden between steps will improve future efforts. I confess the success and speed of this project has encouraged me into recording it before I’ve fully finessed it. 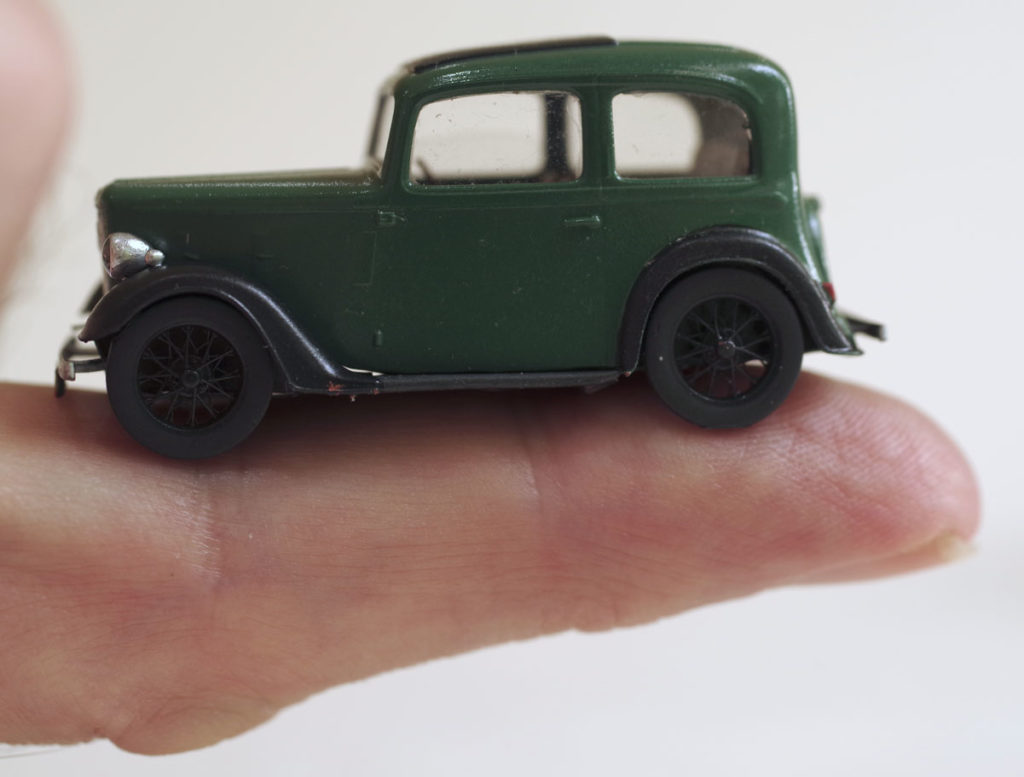 Certainly I have always rather liked the 7mm Austin Ruby that crops up in various layouts from Gordon Gravett as featured in MRJ. The colour of this one is a nod to that inspiration. Wire wheels in 1:64 were a challenge, as was the data manipulation to produce the digital model. Some recent jottings around 3D printing in the model press also provoked me to demonstrate that the process is not as limiting as some would have you believe.

First up this thing is small (the 6’9″ wheelbase is 32.1mm in 1/64). This is quite handy as I was able to print the body in one piece at 25 micron resolution. On the other hand it does make the finishing work a trick. I rubbed down the roof and doors a little prior to priming, but otherwise the model seen here is basically as printed. 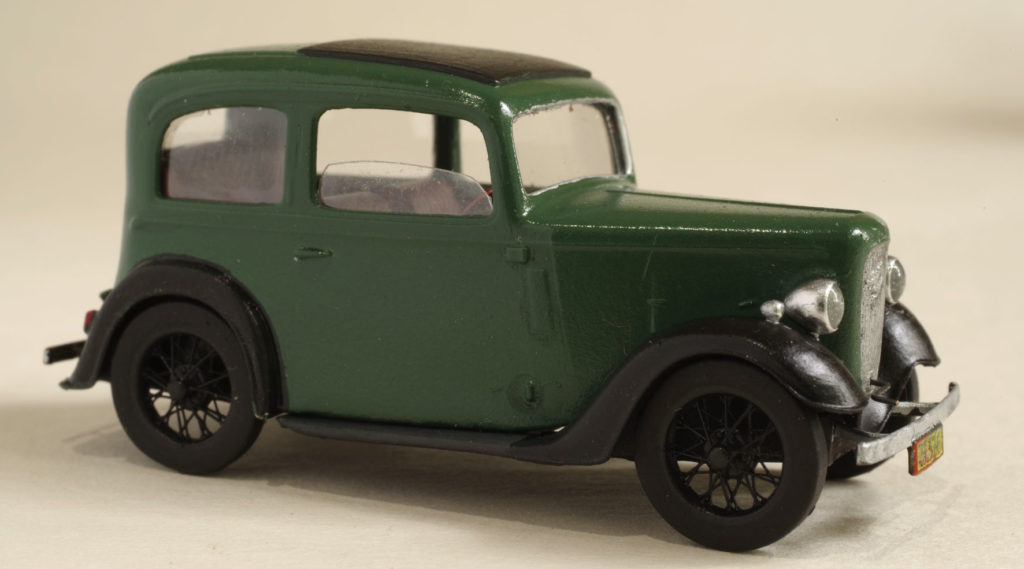 The car itself was purchased as a digital file. This was a huge head start and despite one or two quibbles I’m very happy with the basic data. However the data (intended for graphic art or animation) comprised a large number of surfaces that needed to be manipulated into some 3d solids for printing. This is a little like buying a book when what you really want to do is watch the movie. The book is really helpful, but there is still a LOT of work to do to make the film. The wheels were drawn up from scratch, as were a number of other details (number plates, sunroof, grill etc). There was also quite a bit of manipulation to make the model practically printable and to ease assembly. In fact, the wheels came first as I wanted to make sure they were achievable before investing in the car. I prepared three versions of the wheels with 0.1, 0.15 and 0.2mm spokes. The larger spokes were fine, but surprisingly some of the 0.1mm spokes were quite good too. In the end I ran with those but boosted exposure a bit until I had about an 80% success rate. So I’m not quite sure of their actual diameter. Scale spokes would be about 0.075mm, so I’m still grossly overscale! 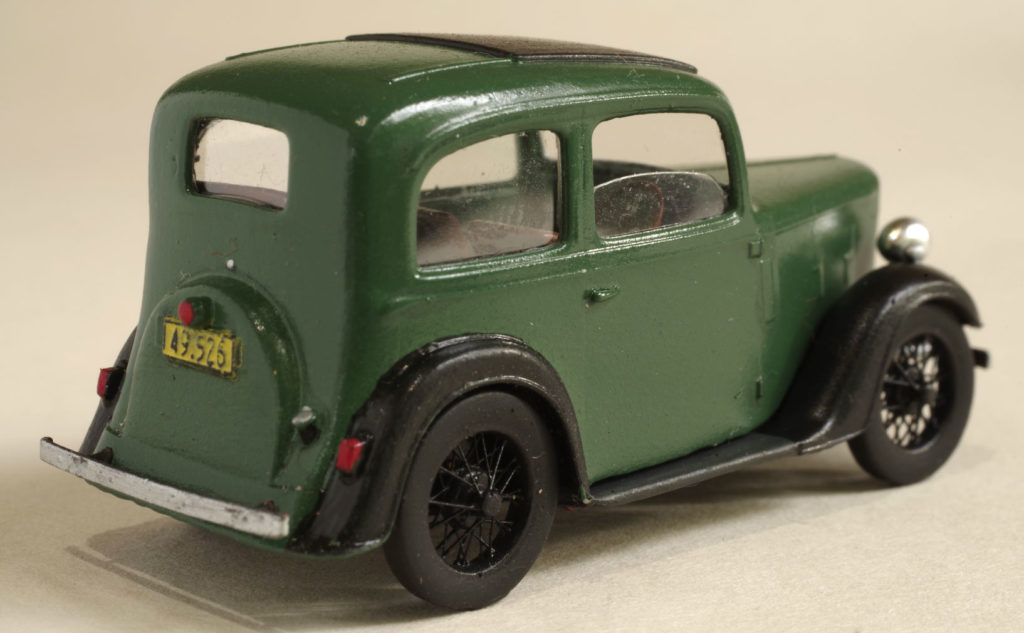 I decided to try printing embossed number plates and this has worked very well, despite the fairly average job of painting them shown here. The plate is painted black and (should be) allowed to fully harden. A wash of the top colour is then applied and allowed to dry a little before being wiped off with a damp cotton bud. 1939 plates should really be orange, ’36 was yellow.

The model is in three basic parts plus separate wheels and bumpers. The parts are the body (less the front wings/lights and running board), the ‘chassis’ with the running board and front wings, and the back seat (plus attached floor pan). The rear seat is separate as it needs to be slid around the wheel arches. The chassis/body is a push fit. Glazing is overhead transparency material held in place with matt varnish. The windows were first cut using a template derived from the digital file. They were then held in place with a strip of blutak, and varnish applied to the edges. Once this had hardened off the blutak was removed and more varnish applied. Any varnish over the glazing was removed with a sharpened toothpick. The windows were cleaned by dabbing on blutak which takes off marks a treat. 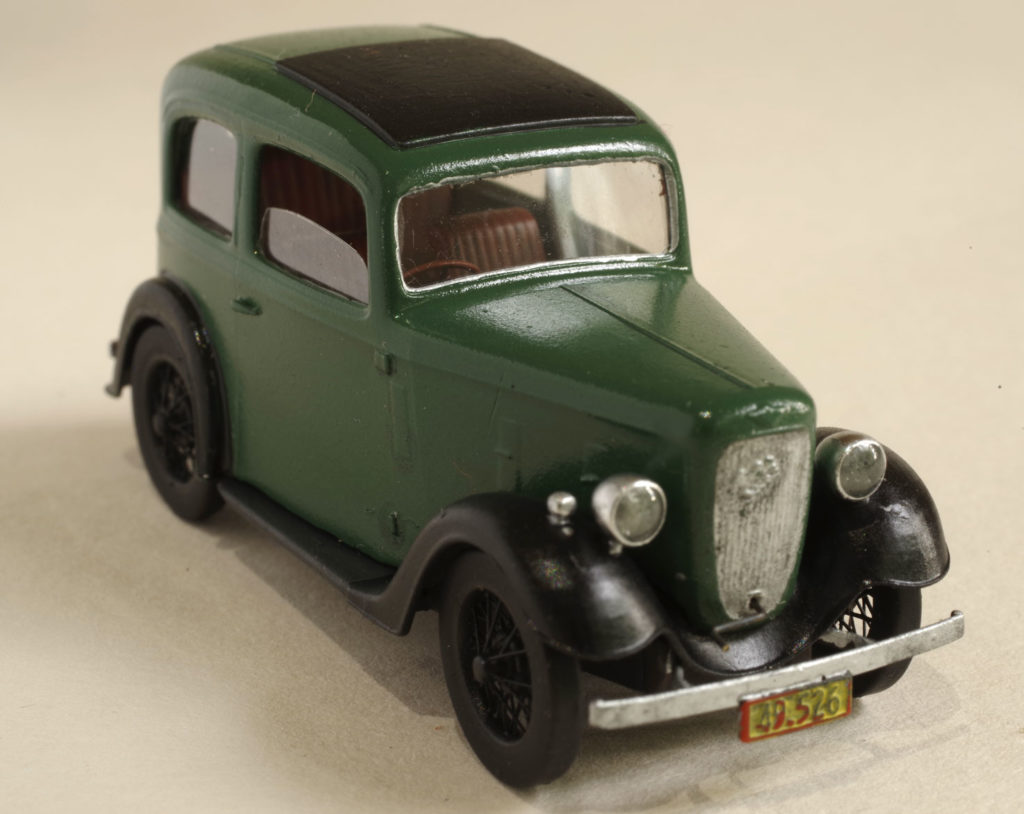 Headlights were printed hollow, painted with Vallejo chrome and then a Molowtow chrome marker. The lamps were then filled with 5 minute Araldite to form the lenses.

There is a whole yard of Austins covering the kitchen table so I anticipate a few sequels to this movie.