So you want to model the NZR?

NZR modelling has been a great hobby for me that has given a heap of entertainment over the years. However it is not without it’s frustrations and difficulties so hopefully this little page will provide some guidance to anyone thinking about NZR modelling as a hobby choice. It’s information I would have appreciated when I started.

Disclaimer:  These views are my own.  While I’ve tried to be objective, it’s well worth talking to others about their experience. In fact, joining or visiting a club or group to find out what NZR modelling is all about is a very good idea.

What do you really want?  The gamut of NZR modelling is broad and I doubt any two modellers would describe their hobby in exactly the same way.  It can be quite an intense and time-consuming activity so you’ll get most out of it if you are honest with yourself about what you are trying to do. The question is by no means as superficial as it might seem.  Unless you have very deep pockets and can commission models, the NZR modeller needs to do almost everything from kits and scratch.  Many kits are basic (compared to something like plastic aircraft kits), so they can take a lot of time and skill to build to  a good standard.  Contrast this to modelling US, UK or European railways where you can get everything out of the box.  You don’t need to do that, even for these railways, but it does mean you can focus on the bits you want to focus on and buy in anything else.  That luxury is not a feature of NZR modelling.

I always feel that ‘the layout’ is the assumed goal of railway modelling.  This may be so for some, but even a modest NZR layout to a reasonable standard can take a long time to achieve even with some compromise. But maybe you just want nice models of steam locomotives to display, like building wagons or some other niche rather than the full orchestral effort of ‘the layout’. If so, that is perfectly fine – it’s your hobby.

Consider too that there are layouts and layouts. Layout goals might include:

Assuming you want one, it pays to have some idea of what a ‘layout’ means to you, how often you’ll run it and what sort of running is going to be personally fulfilling.

Honesty is important.  Large finescale layouts are impressive (and almost unknown for the NZR), but if you will not enjoy the journey to get to that goal, then it’s pointless starting. Conversely, you may enjoy just building things with every model a new start and no intent or desire for a bigger picture or any cohesiveness.  That’s also a valid approach.

Finally, if you are starting, your thoughts here may be a bit vague.  That’s OK.  I’d suggest building a kit, going to a show, reading some Journals or something similar to get a feel for the options before choosing a direction.

Hobbies are supposed to be relaxing and fun.  Knowing what you want to achieve is the first step, but regularly achieving milestones on the journey is a good way to keep the interest and motivation up.  The feeling that you are not getting anywhere will be self-fulfilling.  Before planning on modelling the main trunk in it’s entirety ask yourself if you have the time and resources to do that? Do you have the space for 9mm or the dexterity for NZ120? Make sure you are going to enjoy the journey as the destination will take a while to reach.

Do you want toys to play with or a painstaking nut and bolt recreation of the real thing?  Likely neither of those extremes, but probably closer to one or the other.  One of the things that is seldomly openly stated in NZR modelling is the fidelity of kits and models to the real thing.  This is, in any case, somewhat fraught as much of the NZR was long lived and changed quite a bit over that lifespan.  Nevertheless some kits and models have only a passing resemblance to the real thing while others strive to be far closer.  If you are of a toy-like mindset you will not be worried about fidelity too much, but will probably not want to spend time or money on high spec models either.  If you like to get things right then caveat emptor.

Whatever your taste, it is essential that things actually run (assuming you are not happy with just static display).  A certain level of standard compliance, track laying and basic mechanical accuracy are needed for things to run at all, and somewhat more if you want reliable and realistic running. This is an area where consulting your peers should bring real benefits.

Another consideration is whether to model a place and time, or something broader that is generically NZR but fictitious.  Typically most will be between these extremes.  It is often convenient and practical to model a fictitous station, set in an area over a decade or two.  This allows one to use buildings from a region rather than a single place and to model a typical railway according to taste rather than being confined to historical fact. This approach can be quite casual or rigorous in creating a realistic fiction that might have been. You certainly can model a real location, but NZR stations were typically quite spread out and thus a true scale model may need a lot of space.  A degree of compression is generally needed.

If you want to get things right, the NZR modeller is blessed with a wealth of resources, but a bit of effort is needed to access these.

Successful model railways are consistent.  Even tinplate models can be fulfilling in context.  Consistent colour, quality, weathering, period, geography etc will result in a convincing, or at least visually pleasing, scene.  The extent to which a model ‘works’ is typically defined by the least convincing element.  Nothing destroys a well made scene like an out of the box diecast vehicle.  But even within a model, something like oversize handrail knobs can stick out like the proverbial and spoil an otherwise good model.  Often it is better (in terms of visual consistency) to leave something out than to model it poorly.

Something else to think about: If consistency is the ideal, then improvement over time is going to leave you with a trail of inconsistent models ranging from early efforts to your latest success.  I advocate trying to do your very best straight off and reworking this if need be until you are truely happy with it.  That way in a few year’s time you’ll still be reasonably pleased with it. It is quite problematic if you feel you cannot use your earlier efforts for some reason. 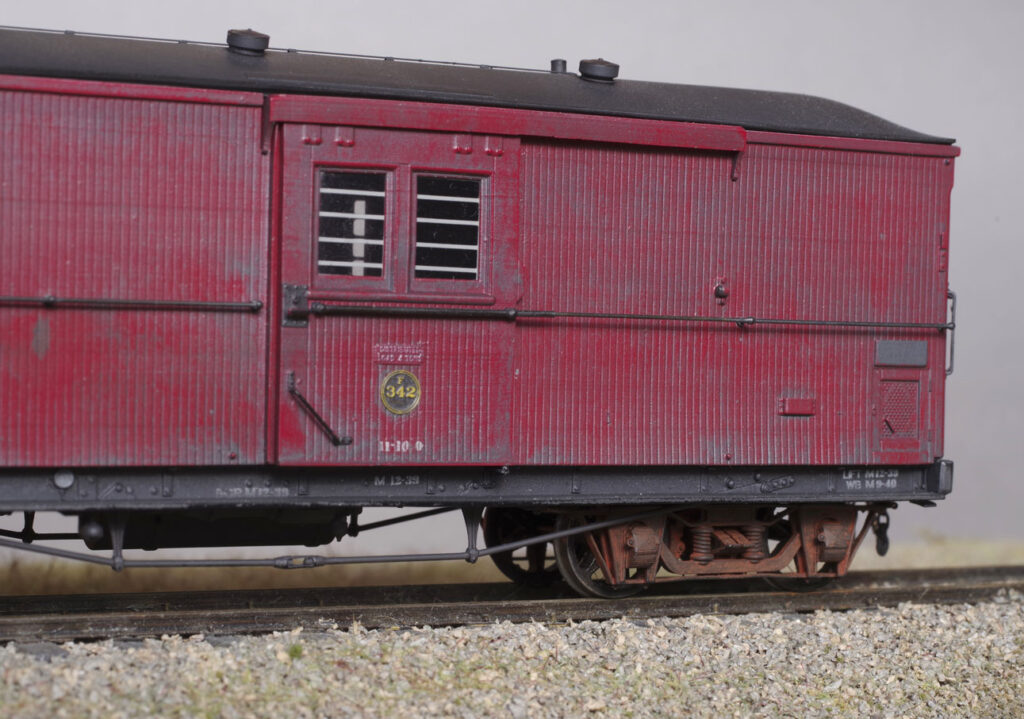 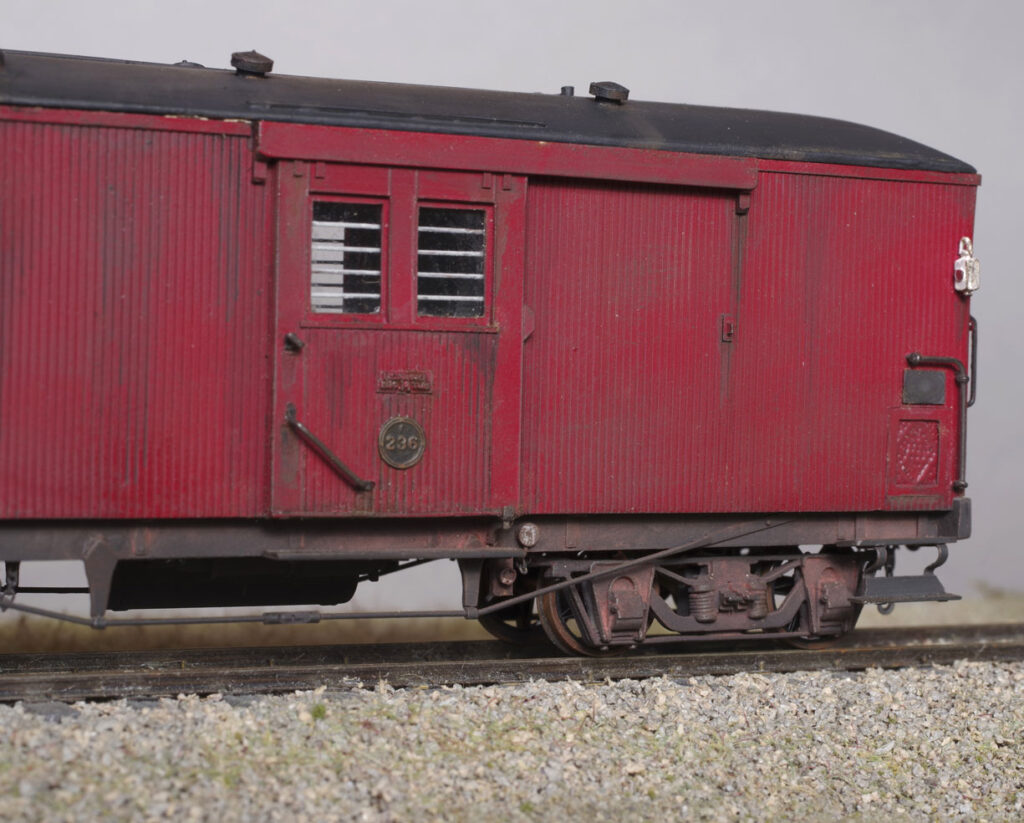 Two vans from 2021 and 1992 or thereabouts.  The new one is better, but the old one can still hold it’s head up.  That’s important as few people build enough models to not use them all.

Many things affect choice of scale:

I have modelled in NZ120, 1:64, NZ48 and 9mm and I really like them all, but for different reasons.  I have always considered that I can model details down to about 0.1mm (not ALL such details admittedly).  In 9mm that’s 1/8″ and in NZ120 around 1/2″.  What that means is that in a 9mm model you could be modelling the heads of wood screws on window frames.  Any less detail and the model looks a bit bare.  In NZ120 you can leave out the smaller bolts and rivets and the model still looks well featured.  So in terms of building something like a steam locomotive I like 1:64 or 1:48 as the detail level that is reasonable to achieve looks very good.  If you want long trains in an expansive scene then smaller scales work much better.  Long trains over tall viaducts are a feature of the NZR, but hard to capture in anything larger than NZ120.  Larger scales have realistic mass and work extremely well for small locomotives, their trains and environs. A 9mm scale Kb is an impressive thing, but it is hard to find somewhere to run it convincingly.

NZR railway modelling is all about ‘modelling’ in the sense of building things.  It’s possible to do quite a good job in the major scales doing pretty much everything from kits. Buying the models of others is a risky business if you are at all discerning.  In any case you are limited to what comes up for sale.  Commissioned models are an expensive option as you are buying craftsman time.

Many personal limitations can be overcome by the synergies of working in a group.  Ironically, groups doing collaborative modelling seem to be less common in New Zealand than elsewhere. Perhaps it’s because such groups need to address all of the foregoing AND achieve consensus.  Groups without layouts are quite common and are very good for support, advice, and prototypical information though. Well worth joining your local group to get a feel for what you like (and don’t like) before leaping in.

The NZ Model Railway Guild is worth joining for the subscription to the Journal.  Back issues are available to members online, so it’s good value for the aspiring NZR modeller.

For what it’s worth, my (current) goal is a smallish layout to fine standards in 1:64 representing the West  Coast in the 1940s.  I’m happy to say that it is within reach in the not too distant future, but it has take a couple of tries and over 30 years of spare time.  On the other hand I have chosen to do the whole thing from scratch.  But the aspect of the hobby that motivates me is problem solving, so it’s all been about the journey.

We offer kits and bits to make modelling the NZR better. Initially I looked at ways to simplify things that were really difficult (car gates, birdcage wire), but pretty soon I branched out into all sorts of things.  For the most part NZFinescale products arise out of my own projects and interests but not uncommonly they crop up as something of a challenge or someone else’s need.

My products always represent the best that I can achieve aside from any minor concessions to practicality and bearing in mind that some products are getting on for 25 years old.

Are NZFinescale kits easy to build? Not exactly. Typically, basic assembly is straightforward but detailing with small parts is more exacting.  To some extent it depends where you stand philosophically.  Would you rather have:

I make a lot of effort to produce kits firmly in the former category.  This requires a lot of research, investment in technology and prototyping runs.  As a result they are not particularly cheap.  But they do offer good value for your entertainment dollar. If you are tempted, many kits have downloadable instructions, so feel free to check them out. Peruse my blog too;  There should be something in there for everyone.