It’s been a long time between layout updates.  Mostly this has been due to absolutely no direct progress, but this is deliberate.  My plan is to have all the stock and structures completed before getting too much into the layout.  The reason being that layouts fall into decline after completion, so I want to avoid the onset of decay until the last minute.

To recap: The layout is based on Rewanui c.1940, and is intended for exhibition. The yard and bridge 18 across the seven mile will be modelled pretty much to exact scale, the incline will be greatly compressed featuring the Photographer’s rock and the steep rock backdrop before exiting via a tunnel.  I’ve had to lose the runaway siding and the incline will not, in fact, be inclined.  Typical operation will involve: 1. Empty trains entering from Dunollie (offstage); 2. Shunting the yard; 3. Crossing the seven mile to the bins (offstage); 4. shunting full wagons back to the yard and 5. Departing for Greymouth.

The area to be modelled is illustrated in the rectangle superimposed on the station drawing below. 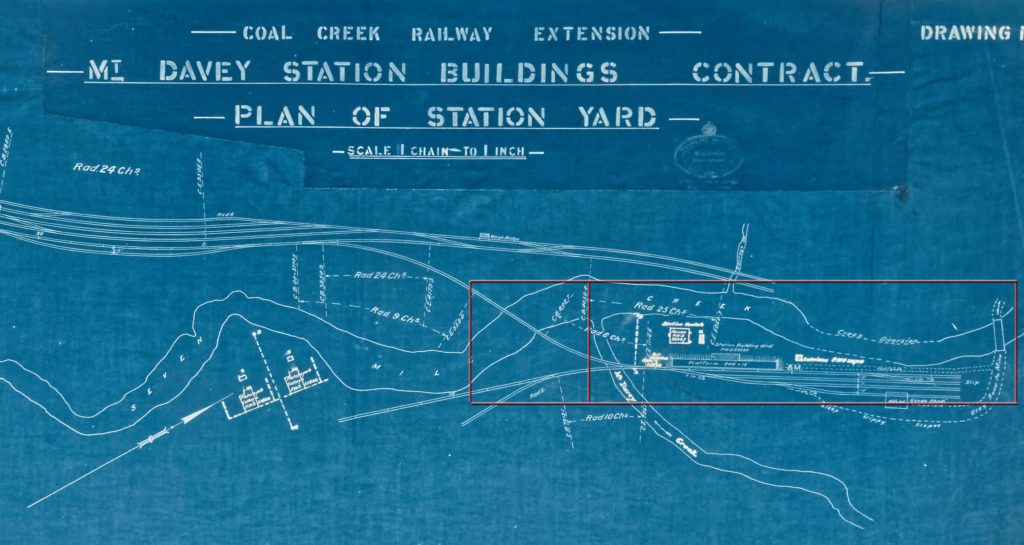 The smaller rectangle is the baseboard I’m currently working on and the subject of this little update.

The current state of play has the basic landform in as well as the basic civils.  The concrete work is wrapped in clingfilm to prevent damage and the structures and trees are just placed for visualisation.  the Rock castings are from my own moulds made from large chunks of coal.  Mostly they are cast in expanding urethane (which is extremely light), but a few are in Sculptamold (A plaster/cellulose fibre medium that is also light).  The landform is generally newspaper and wallpaper paste over high density styrofoam or chicken wire.  Detailed land sculpting is with Sculptomold.  At this stage colouring is rudimentary only. 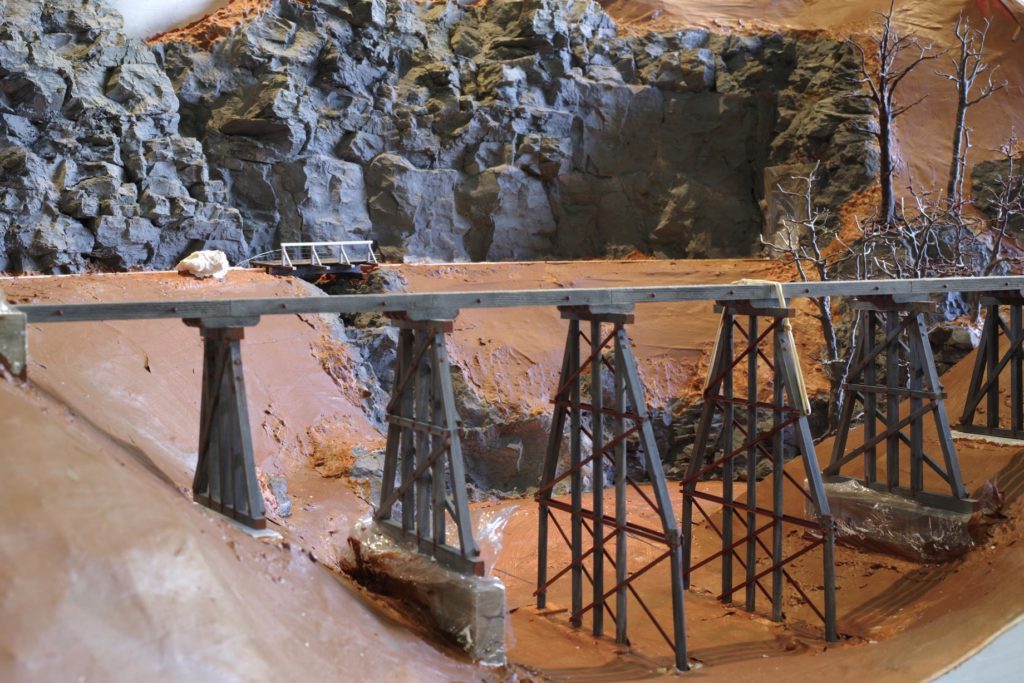 This picture is taken from the west side of the Seven mile looking over bridge 18 back towards the incline.  The bridge is based on drawings prepared as part of a university engineering project kindly supplied by Jim Staton. I now also have the construction contract drawings from National Archives.  It is as close to a scale representation as I can manage. 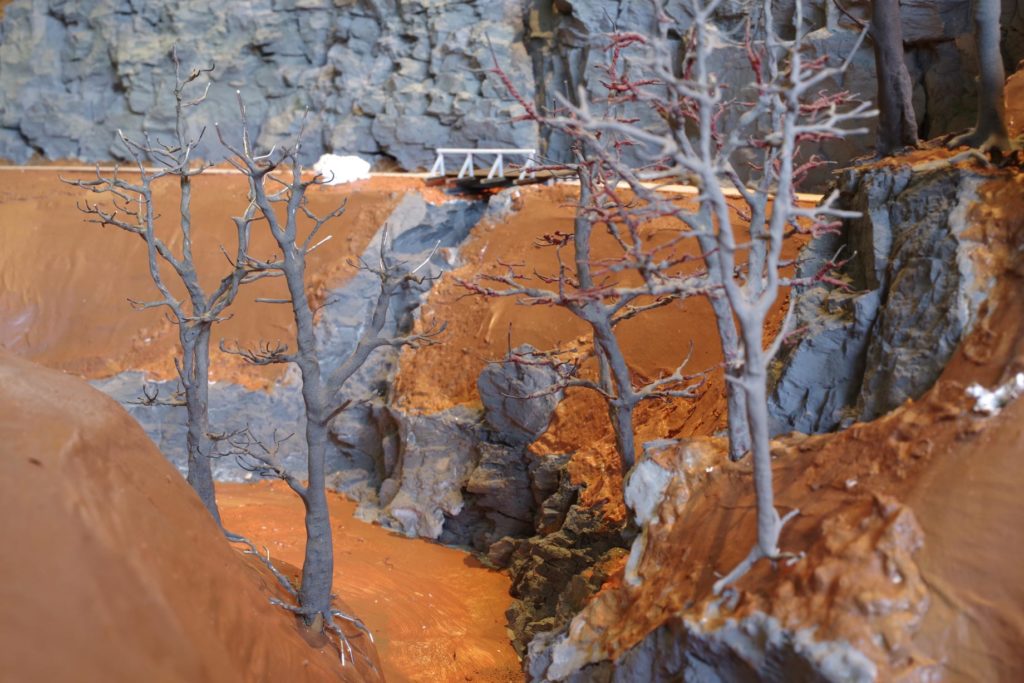 This is a view looking back up the Seven Mile with the incline on the right. It is largely fictitious and taken from the location that will be fiddle yard.  This will be screened from view by the forest and the width compression of the creek will not be visible from normal viewing angles. 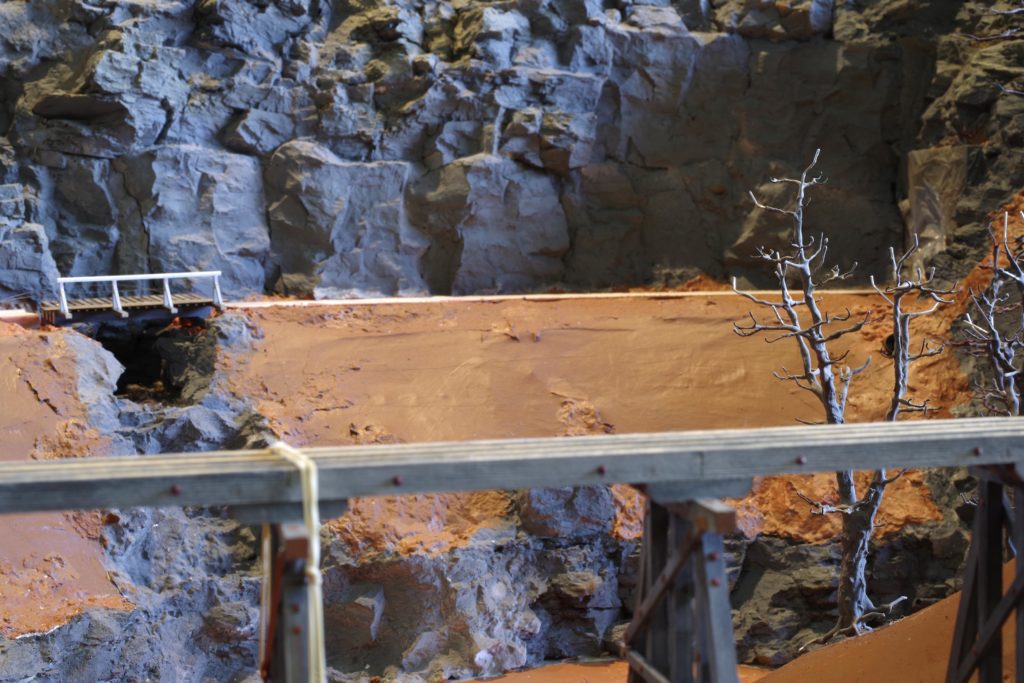 Bridge 18 in the foreground looking back at the incline.  The small bridge in the background is 2x 20′ spans in the prototype reduced to a single span in the model. The small creek flowing under it is inspired by one on the incline, but not the one flowing under the real bridge.  This modeller’s license is to minimise the layout width. 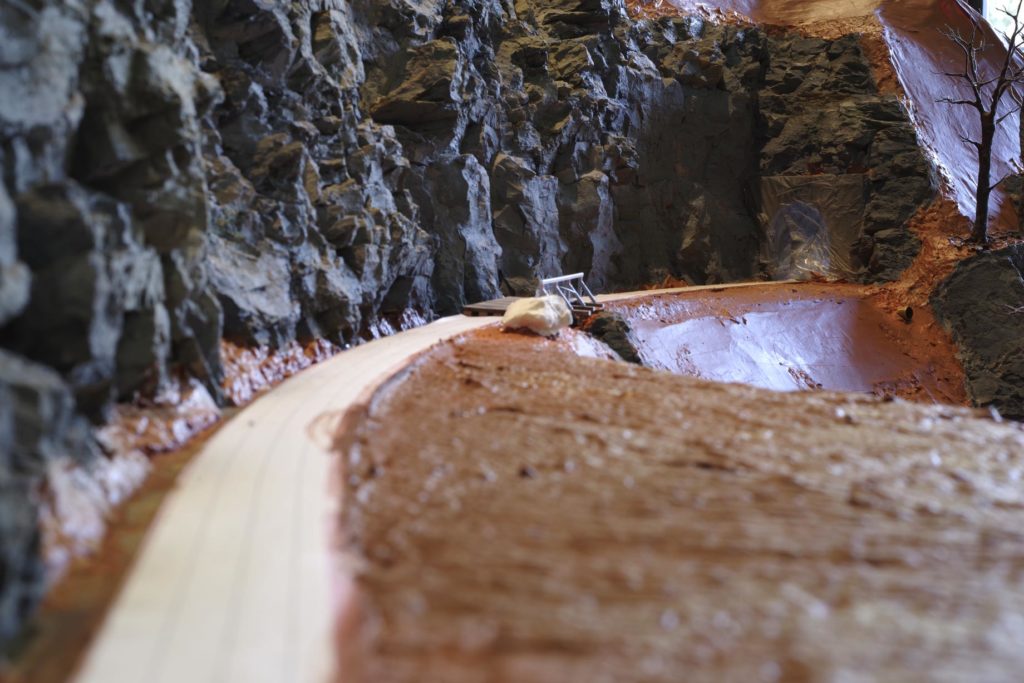 Looking down the incline past an anaemic and malnourished Photographer’s rock to the shrink-wrapped tunnel mouth.

The current objective is to get all baseboards to a similar state and to lay track.  After that the layout will definitely languish until the stock and structures are finished.