These kits have been promising for a while.  Final test builds have been completed, instructions are nearly written and stock is on order.  So here’s a preview…

The Q1 and Q4 were both unbraked iron bodied hopper wagons that could be found in both the Westport and Greymouth areas from the turn of the twentieth century until the end of steam.

Hoppers for the Q1 were originally 6T capacity to BP535, but were extended to 8T on BP3270 from 1903.  Underframe was BP348 of 1896 (although a small number had the BP3148 underframe more typically carrying the Q4 hopper).  Q1 is easily recognised as it is the only variant with the lifting eyes recessed part way down the body. There were at least two different handbrake arrangements on the BP348 underframe.  The kit represents the extended hopper in the BP348 underframe, of which around 200 were made.

The philosophy for these kits is for something that is well detailed, yet not too tricky or time-consuming to build.  Digital design means that there is an extremely accurate fit between etched, cast brass and 3D printed resin parts.  Of course, the detail level is high too.  Clean up and fettling are minimal.  I built the test model with an ordinary Weller soldering iron and no special tools (other than a rivet punch).  Photos are warts and all, with no clean up (other than where necessary for fit/free movement) for the purpose of illustration.  For the most part solder joints can be made so that any excess will not be apparent in the finished model. I’ll tidy up my model with the sandblaster, but a little more attention to excess visible solder during the build could avoid that need.

Q1 has wooden headstocks and these are represented by brass castings. The rest of the underframe is etched brass.  The hopper,  generally the difficult bit, is a one piece 3D print, with separate door parts.  The Q4 is of broadly similar design, but as the prototype headstock is channel, the headstocks are etched.

As always these kits feature sprung axleboxes.  The axleboxes slide in the horns and are supported on hidden guitar string ‘leaf’ springs.  This system has real benefits in keeping wagons on the track, reducing noise and producing realistic motion in the vehicles.  If this isn’t attractive to the builder it is possible to fix the axleboxes in place.  My latest version of this system is quite a bit  faster to build and tune than earlier versions.

The album below shows construction of the Q1 using photos drawn from the instructions.

As can be seen, the basic operations are embossing rivets, folding etched brass at half-etched guides and soldering parts together.  Parts are largely self-jigging and I generally used wooden clothes pegs or basswood offcuts to hold parts when soldering. 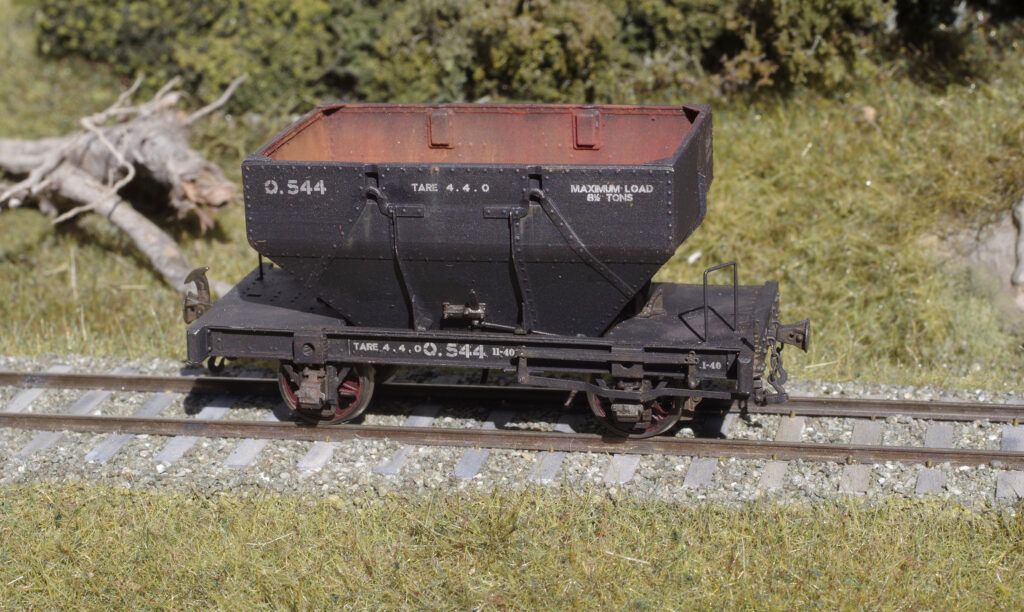 The Q4 is quite different to the Q1 in it’s construction, but the principles are identical as shown in the album for the Q4 kit below. 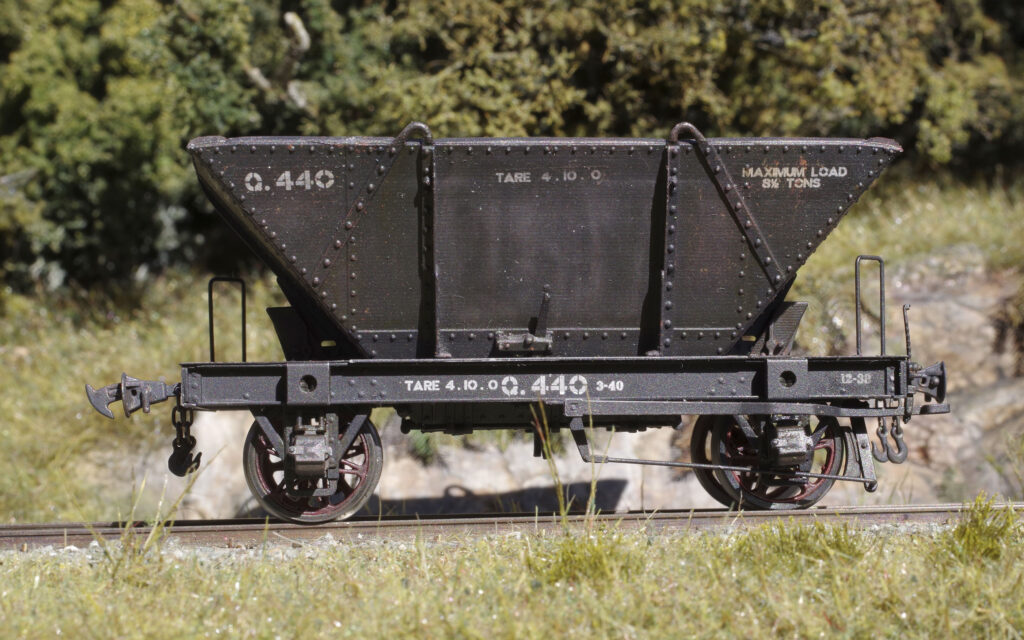 What’s included in the kits?

Kits include etched brass frets, brass castings and 3d prints, together with NY wheels, pinpoint bearings, wire etc to build the basic wagon.  Instructions will be supplied in soft copy and consist of a fully illustrated build diary. Not included are couplers, sidechain, and  hooks which are available separately. Decals are not currently supplied, but should be available separately at a later date.

As with all my kits, I offer ‘no fault’ support.  If you lose, break or muck up a part I’ll replace it*.

Very limited kits are available now.  They should be fully available in 6-8 weeks, which is the turnaround time to get stock on hand. Check back often as new kits will be added and pages updated over the next few weeks.

Full price for the kits is $75 per wagon. Wagons ordered before 15 October will be $65 per wagon (to be supplied when stock is on hand).

*  Part replacement is generally at no charge where feasible.  The objective here is to make building kits as easy as possible. Depending on what is needed I may impose a charge to cover costs and postage. This offer depends on replacement parts being available, but we’ll always do what we can to help.